Infantile Colic and Cow's milk: Is there a link? - Chiropractic Moves Skip to content

Home // Blog // Infantile Colic and Cow’s milk: Is there a link?

Infantile Colic and Cow’s milk: Is there a link? 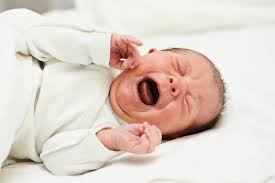 Infantile colic is a little controversial.  There is much debate about this condition; the points for debate include; cause, diagnostic criteria and if colic actually even exists.  At this point in time the consensus is that colic is real and is characterised in an infant by extended bouts of crying, fussiness and/or irritability in an otherwise healthy baby (2).  A common method used for diagnosis is Wessel’s rule of three.  Colic is present when there is crying for at least three hours per day, for three days in any one week, for at least three weeks in the first three months of life (1).

Colic affects up to 28% of infants in the first year of life (3).  Symptoms may include crying, irritability, fussiness, inability to settle, fist clenching, back arching, drawing knees into chest, flatulence, changes to bowel habits, flushed red face (2).  The symptoms are so variable that makes it so hard to know the exact cause for the individual child.  Condition’s which may complicate colic include: cow’s milk protein intolerance, soy protein intolerance, infection, intusseption, bowel obstruction, pyloric stenosis, nursing technique, maternal diet, parental stress and more.  This blog will focus on the evidence linking colic and a cow’s milk protein intolerance/allergy.

Cow’s milk protein allergy affects 2%- 10% (depending on source) of infants 2 years of age and under (4).  There is a variability in degree of sensitivity amongst sufferers. Colic is one of many presentations which is common amoungst babies with a cow’s milk protein allergy (4).  Other signs may include; gastrointestinal system changes (constipation, diarrhoea or an interchange of both), respiratory system changes (snuffly breather, crackles/wet sounds, runny nose, blocked sinuses), skin changes (rash, redness, eczema), sleep changes (especially at night, poor settling) (5,6).

Many articles also discuss the complexity of colic and the common cross over with gastro-oesophageal reflux and oesophagitis; which are also commonly associated with a cow’s milk protein intolerance (1,3,4).

Sources also suggest the indication for an elimination (of cow’s milk) diet cannot be based solely on allergy tests; as these can be unreliable as the allergy response may IgE mediated or T-cell mediated and more research needs to be done in terms of developing the gold standard in diagnosis of cow’s milk protein intolerance/allergy (4).  Should this be simply done by an elimination diet and see if the baby’s symptoms relieve?

In many children with a cow’s milk intolerance even the slightest exposure to cow’s milk protein can be enough to perpetuate their problem and cause an allergic response from the immune system. Therefore, total avoidance is important for their long term benefit.

Hi, I’m Michael; Chiropractor, Dad, science enthusiast, active weightlifter and keen sportsman. I work with busy and active people who are struggling with pain to find relief from their symptoms so that they can return to an active lifestyle, get through their work day and their workouts without having to pop a pill so that they can feel happier and healthier in their body.